March 10, 2020
Hi all! I have exciting news I'd like to share with you, but before I get to that, I wanted to give you the background. This goes all the way back to late high school, but I'll be quick. Scroll to the bottom if you want the news without the pictures. 😉 (Also, if you're new to my email list or blog, they're usually a lot more specific to ministry, but I'm making an exception. Check out previous blog posts if you want to know more about my ministry!)

My senior year, I was trying to figure out what to do with my life and I had two options. I either wanted to study Bible at Liberty University in Virginia to do some sort of ministry or study math at UTD to be a math teacher.

I entered a random drawing for a huge scholarship at Liberty and I won. So it seemed like my choice was made! I made plans to move to Virginia. But at the last minute (like in July - literally the last minute) the scholarship fell through and I was devastated. By that fall, it was clear that I would not be going to Virginia, but would stay close to home and attend UTD. 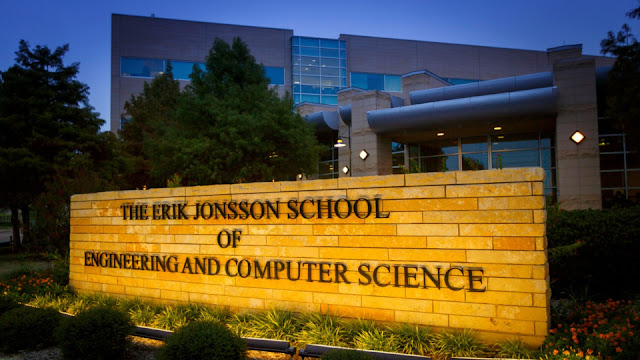 I studied electrical engineering instead of straight up math, since Dad pointed out I'd probably have more job opportunities that way. 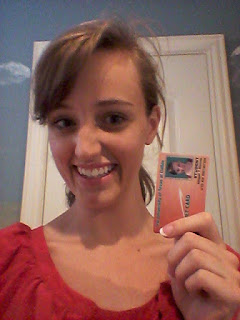 So I started a degree in EE at UTD and here's a grainy selfie to prove it. 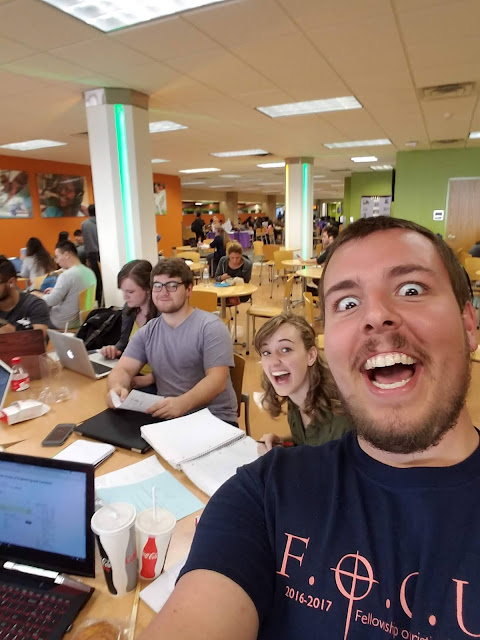 I made some awesome FOCUS friends right off the bat. 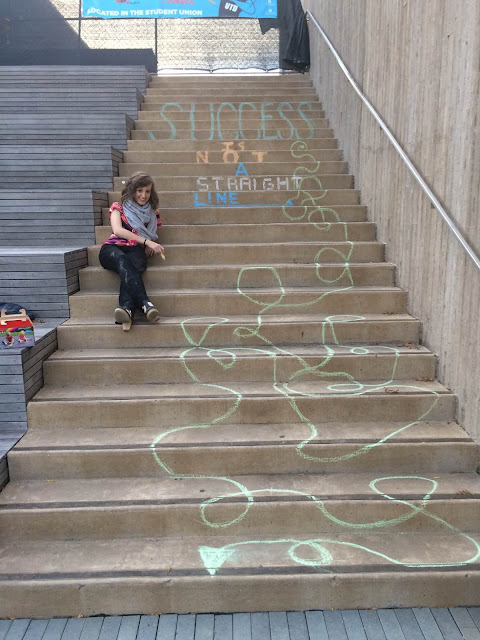 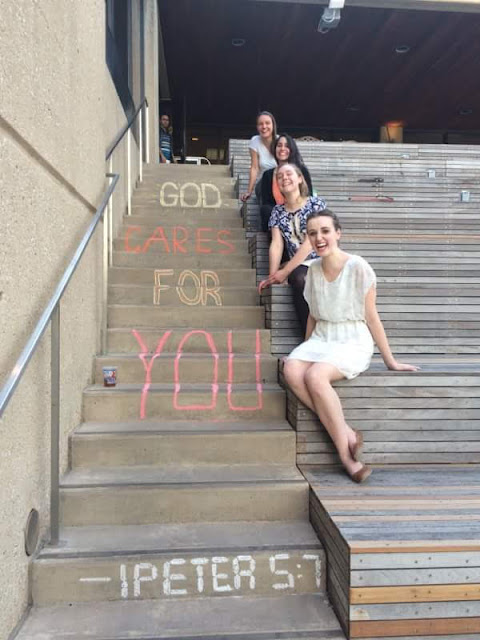 I started an annual tradition of drawing inspirational messages on the UTD Plinth stairs. 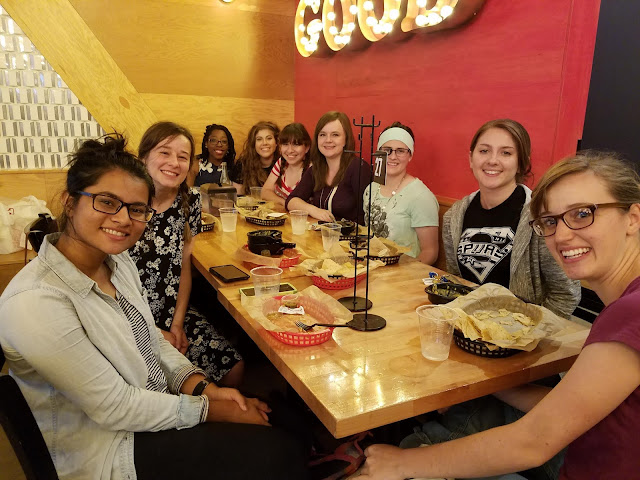 I led my first core at UTD with Sarah. 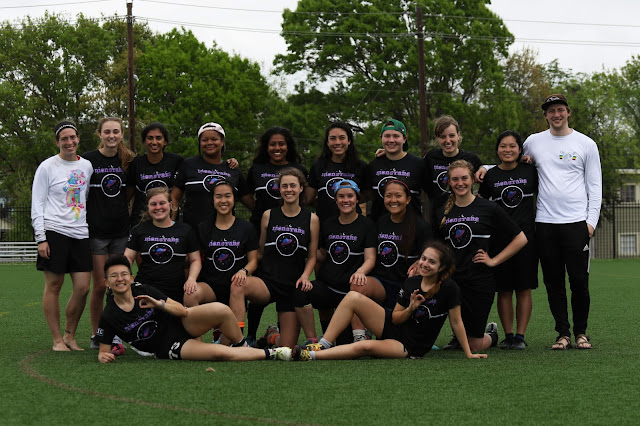 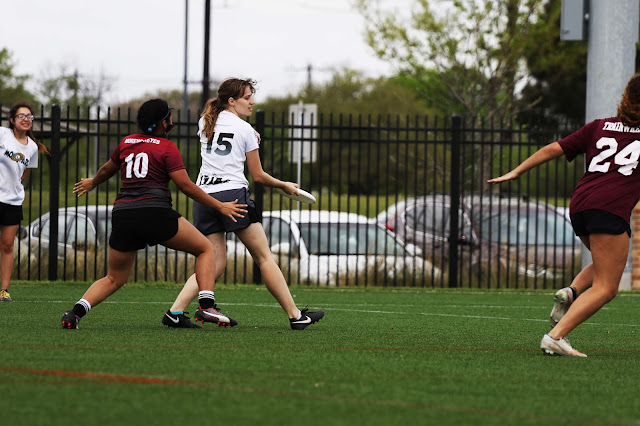 I learned how to play ultimate with the UTD women's team which was incredible! 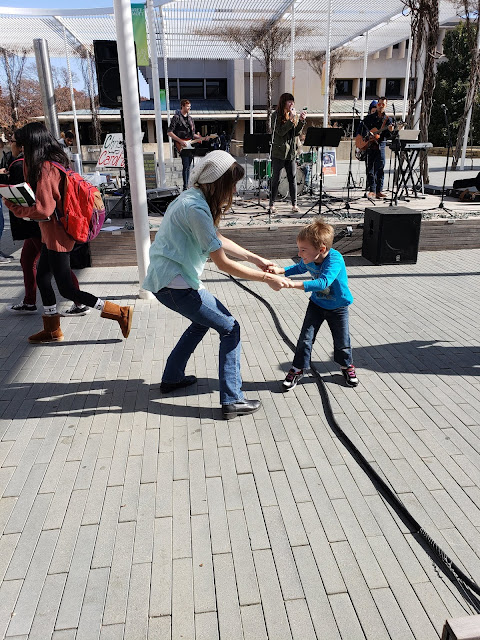 Did lots of dancing with many friends on campus and off (but the theme here is UTD so here's a picture from on campus specifically). 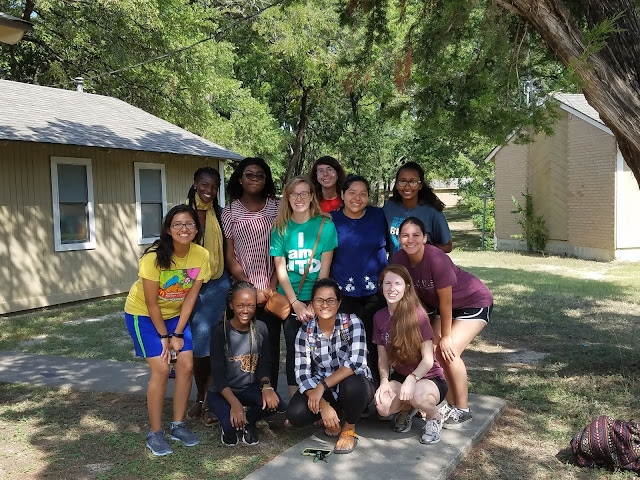 I led my second UTD core with Joyce.

I eventually graduated with my degree in electrical engineering (and took zero pictures commemorating that, apparently, because that's how I roll.) 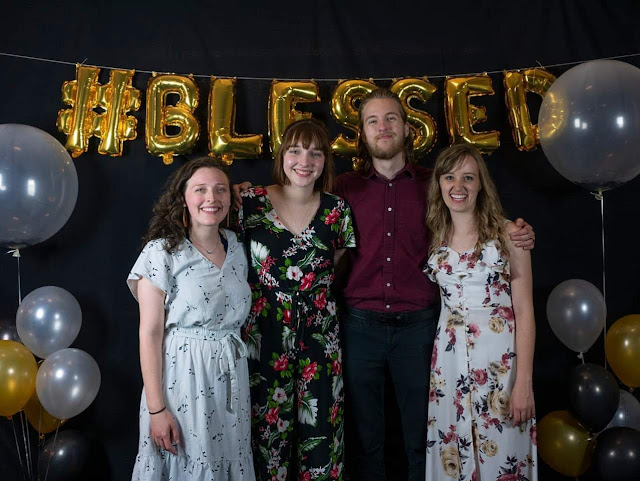 Then I started my apprenticeship last year with these lovely people and was finally getting the opportunity to study Bible and ministry like I originally wanted to! I worked with UTD FOCUS for a year with these fellow apprentices. 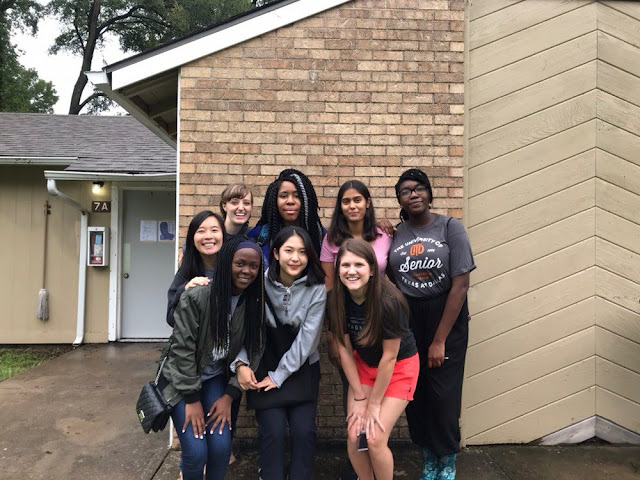 Led a UTD core as an apprentice with these girls.

And finally this year, I left UTD and moved to Collin to do ministry there. 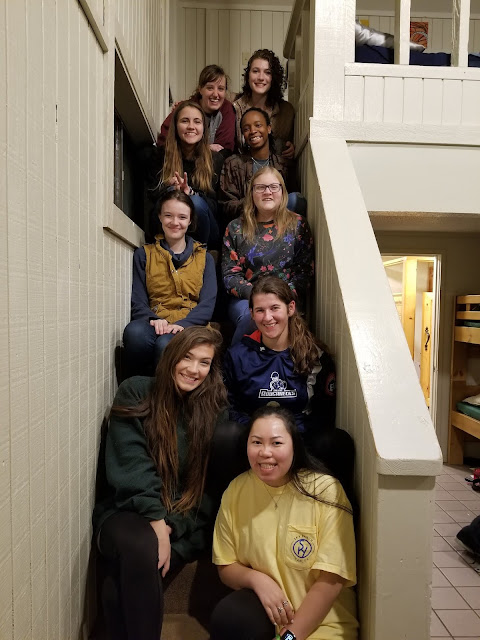 Led my core this year with Vanessa

And it's been awesome! I have learned and grown so much and made more friends than I imagined I would. Collin has been an incredible blessing and I will be sad to leave. But I think at this time that God is calling me elsewhere.

Yesterday, I got accepted into the master's math program at UTD, so I'm going back! The long term plan is to be a math professor. So that means that I'll be leaving FOCUS staff for the time being. Maybe someday God will call me back, and if he does, you all will be the first to know! In the meantime, I'm going to finish out this semester from now until May, and start grad school in the fall. Apparently, back when I was deciding between studying Bible so I could do ministry and studying math so I could be a professor, God actually wanted me to do both!

Love you guys and thanks for reading through my entire story here. If you want to keep giving, there are many other FOCUS staff members (at UTD, Collin and elsewhere) in need of your support, so please consider giving to them! Otherwise, thank you so much for supporting my ministry these last two years (and for continuing to do so until May 😉). It means so much to me and I'm grateful for the experience.

Popular posts from this blog 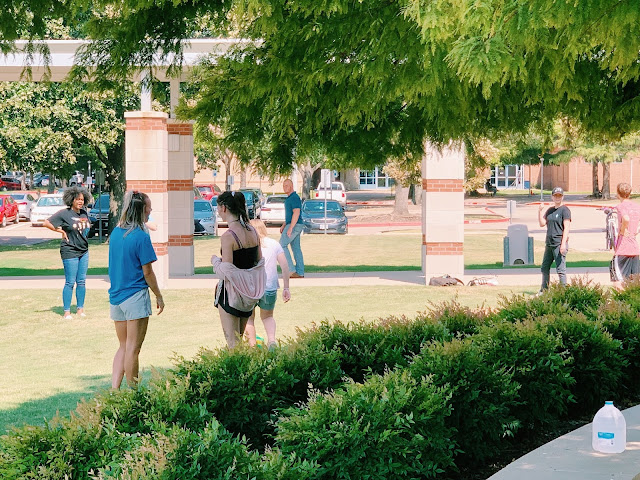 Hi all! It's been a busy month! School started two weeks ago, and we've concentrated our efforts on just being on campus, being as visible as possible and meeting as many new students as possible. I got to meet a ton of new girls and invited them all to our small groups or our large group meetings. This is what our welcome week looked like.

Volleyball at the campus apartments on Wednesday
Welcome week event schedule. We gave these flyers out to as many students as we could.
On Thursday, we kicked off our large group meetings and tons of new people came! The room was packed, and I was able to spend the evening with four different girls, all of whom attended a small group the next week.

Thursday night Fellowship meeting
The last couple of things we kicked off were core (or small groups) and peer team (a small group leader meeting.)
Our core was on Wednesday night. I get to lead with Vanessa, who is one of the sweetest humans on the planet and i…
Read more 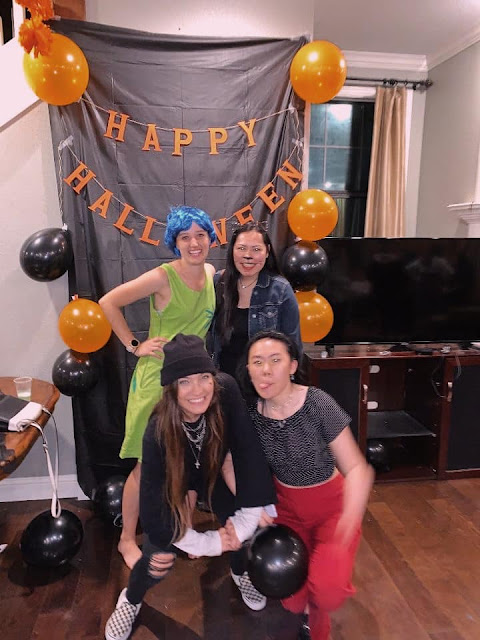 Ministry is great and I have so much to be thankful for, but honestly, it's also pretty rough sometimes and this month, I have a lot of prayer requests. I want to tell you about what God's been teaching me, a few great blessings, and then share some more difficult things.

First, something God's been teaching me about - suffering for the sake of Christ
This is an ongoing discussion we've been having as a staff team. My biggest question was, what if my life is just going great? Does that mean I'm not following God well? I've been praying about it and earlier this month I feel like God answered me. There were several days back to back when I felt particularly burdened by other people's struggles. And I realized that that is part of suffering for Christ. We should put ourselves in situations where we risk getting hurt sometimes if we're doing it to love other people. And I don't say that to preach at you. It was a pretty shocking realization to me, beca…
Read more